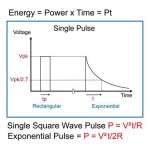 A pulse resistor is a resistor installed in a circuit to prevent a “surge” when conditions arise where a surge might occur.

There are a number instances where energizing a circuit is followed by a surge of current. Like almost all the time. When that circuit “comes on” after the switch is flipped, current is flowing. And sometimes we need to place a resistor in series with the component or components that want to draw a ton of current on startup. We can look at a component that might just do that.

Capacitors (caps) are sometimes fitted with something that limits a big shot of current when a circuit is energized. Caps, you recall, begin operation in the circuit of a modern equipment uncharged, and when these caps are first “seen” by the voltage source at the moment it’s turned on, they look like a short circuit. Lots of current may want to flow. Jumping ahead, the cap sits in the operating circuit fat, dumb and happy “using” only a little current after things are going. But at startup, it needs to be checked to prevent it from “sucking up” (or sinking) too much current and overloading the supply. The surge resistor is on the job each time the circuit is energized.

There are other applications for a surge resistor, but the purpose is the same – prevent “too much current” from flowing at a given moment so the circuit can transition into a “normal operating mode” (where current flow is more modest).

The surge resistor is similar to a so-called current limiting (or, perhaps, ballast) resistor, but the name applied to the resistor in question might have more to do with the specific application. Wirewound resistors are perfect for high surge applications and Riedon offers one of the best “joule rated” resistors in the industry.