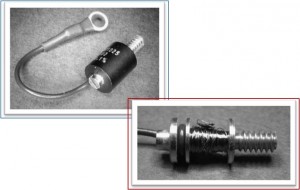 Platinum, a precious metal, has seen dramatic price increases over the last 10 years. In 1999 platinum was about $400 per ounce, today it is $1700 per ounce and it peaked at $2200 per ounce in 2007.  This has caused platinum RTDs to increase in price dramatically.

In the above example, our customer came to us to redesign their current part to make it more cost effective. We were able to shrink the part and integrate a threaded screw reducing part count and making it easier to install. A strain relief is built in for the flying lead which makes the overall package very robust.

Riedon is the largest precision wirewound manufacturer in the world. We have the expertise to solve your most difficult problems.