Can you imagine all the buildings running on DC power? Riedon is working with Purdue University to develop DC smart shunt for this exciting project. Please read on…

Did you know there’s a silent war going on inside your home? Alternating current (AC) electricity comes in from the grid, but many of your appliances and lighting run on direct current (DC). Every time you plug in a TV, computer or cell phone charger, power must be individually converted from AC to DC – a costly and inefficient process. Purdue University researchers have proposed a solution to the problem by retrofitting an entire house to run on its own efficient DC-powered nano-grid.

The project to transform a 1920s-era West Lafayette home into the DC Nanogrid House began in 2017 under the direction of Eckhard Groll, the William E. and Florence E. Perry Head of Mechanical Engineering, and member of Purdue’s Center for High Performance Buildings. “We wanted to take a normal house and completely retrofit it with DC appliances and DC architecture,” Groll said. “To my knowledge, no other existing project has pursued an experimental demonstration of energy consumption improvements using DC power in a residential setting as extensively as we have.”

The first years were spent renovating and upgrading the infrastructure, and adding energy improvement measures like insulation and new windows. Rectify Solar provided a full installation of solar panels on the roof, while industry partners supplied new appliances and HVAC systems.

Then came the hard part.

“Large-scale distribution of DC power through a house in the 21st century is really uncharted territory,” said Jonathan Ore, a 2020 Purdue Ph.D. graduate who served as the lead researcher on the project. “You can’t just go to the hardware store and buy DC circuit breakers or other critical distribution systems. We had to create this infrastructure from scratch.”

Purdue researchers, in collaboration with Rectify Solar, developed a patented distribution system that enables the house to integrate both DC power – from solar panels, wind turbines or battery storage – and AC power from local electrical utilities. The system is also modular, so it can grow and adapt for different sizes of homes and businesses, integrating multiple sources of electricity.

“The creation of the 380-volt DC load center was definitely a challenging and rewarding experience,” said Phil Teague, co-founder and CEO of Rectify LLC. “We used biomimicry and the neural connections of the brain as our inspiration, and added smart technologies and control mechanisms. Transitioning to DC can simplify homes, buildings and the grid as a whole. This project helped me realize that DC is not only the future, it always was.”

AC has been the dominant infrastructure in the world’s electrical grids since the late 1800s, when the “war of the currents” saw Thomas Edison’s dream of a DC-based electrical infrastructure lose out to George Westinghouse’s AC system. But while the “war” may seem to be over, two recent developments have prompted researchers to re-investigate DC’s benefits. The first is the increasing availability of renewable energy sources – solar panels and wind turbines – as well as energy storage in large home-based battery packs. These devices are all naturally DC, so to have a DC-based home infrastructure enables this energy to be delivered with almost no waste or inefficiency.

The second development is a series of extreme weather events, which have exposed the fragility of the U.S. electrical grid. Winter snowstorms in Texas, as well as extreme heat in the southwest, have caused brownouts and blackouts to become increasingly common.

“The United States grid is like one of those marble-balancing games where you tilt the table to keep the marbles from falling off. However, tilting in one direction to save one marble can cause the rest to come crashing down,” Ore said. “When too many homes suddenly start requesting extra power for heating or air-conditioning, the grid can become severely unbalanced while trying to respond.

“A DC-house can potentially sustain itself for short periods of time by generating its own renewable energy and detaching from the grid through the help of on-site stored energy. This ultimately minimizes the strain on the outside grid in emergency situations. Events like the Texas storm are perfect illustrations of how a DC-house can benefit individuals and the community.” 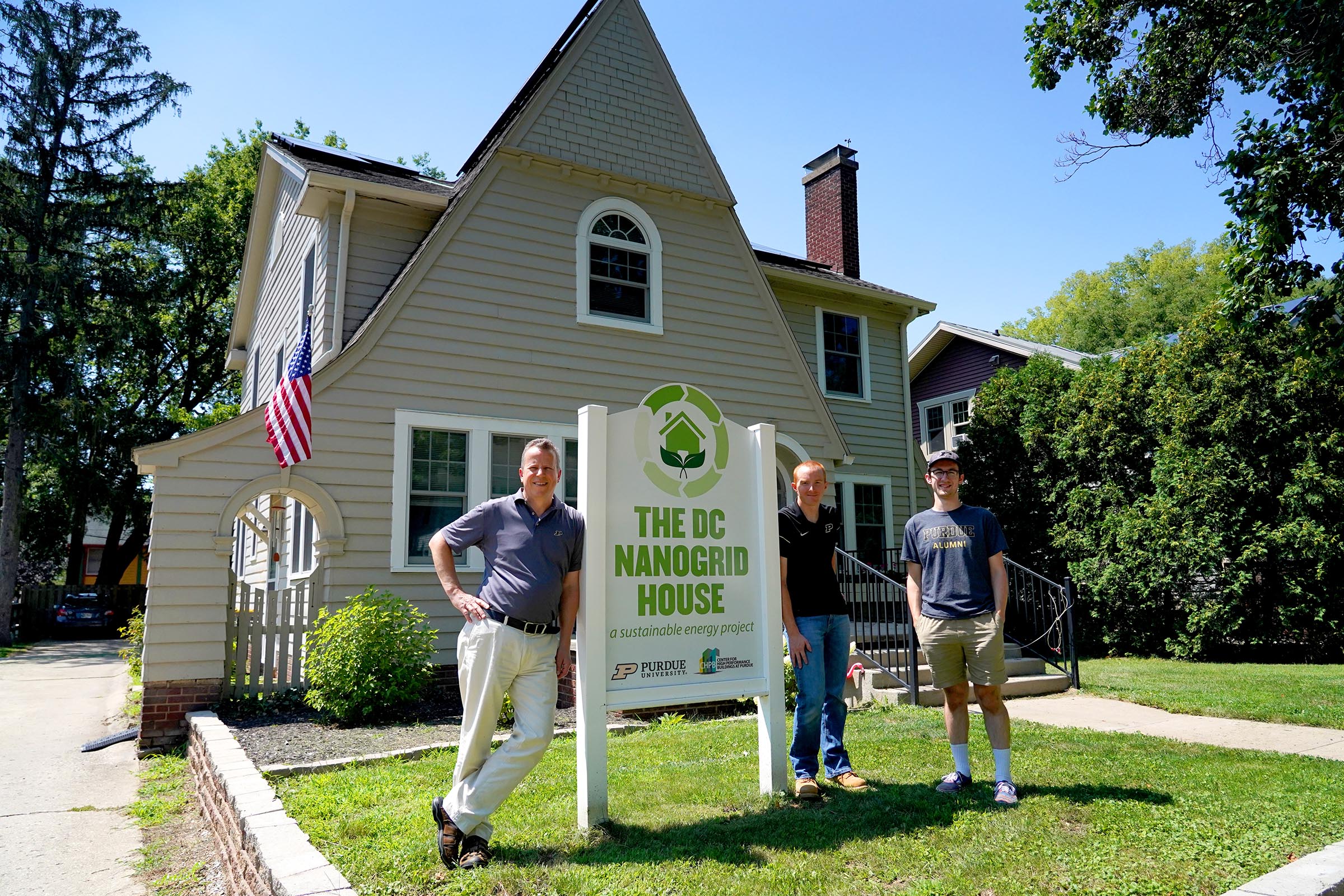 Purdue’s DC Nanogrid House is a “living laboratory.” Graduate students live in the home full time to offer real-world feedback on its comfort and usability. They’ve installed sensors in every room to detect whether people are present so that the HVAC system only conditions air where it’s needed.

“This gives us the opportunity to perform both cutting-edge research on energy-saving opportunities and observe its potential benefits in a truly real-world setting, rather than just relying on simulations,” Groll said.

This is the second living laboratory Groll has established near Purdue’s campus, following the lead of his ReNEWW House, which explores technologies for net-zero energy, water and waste.

Emerson provided the control software and system. “The next-generation energy solutions that will drive the future of sustainability are, unsurprisingly, being envisioned and made real by the next generation of innovators,” said Bob Yeager, president of Emerson’s power and water business. “We are proud of the role our Ovation software and integrated automation technologies play in making student innovators’ visions a reality and excited to see how a new generation of thinkers will leverage our digital foundation to maintain grid stability and create more resilient, sustainable communities.”

“It’s been really amazing to see the interest in this,” Ore said. “We started this project as just a proof of concept. But as our country experiences more and more issues with the grid, companies are actively seeking to integrate our work. People are interested in it from every aspect: from the electrical side, from the thermal side, from the automation and management side. This is a perfect testbed to experiment with those technologies.”

Purdue innovators have worked with the Purdue Research Foundation Office of Technology Commercialization to patent this technology. The researchers are looking for partners to continue developing their technology. For more information on licensing and other opportunities, contact Dhananjay Sewak of OTC at [email protected] and mention track code 2021-ORE-69439.