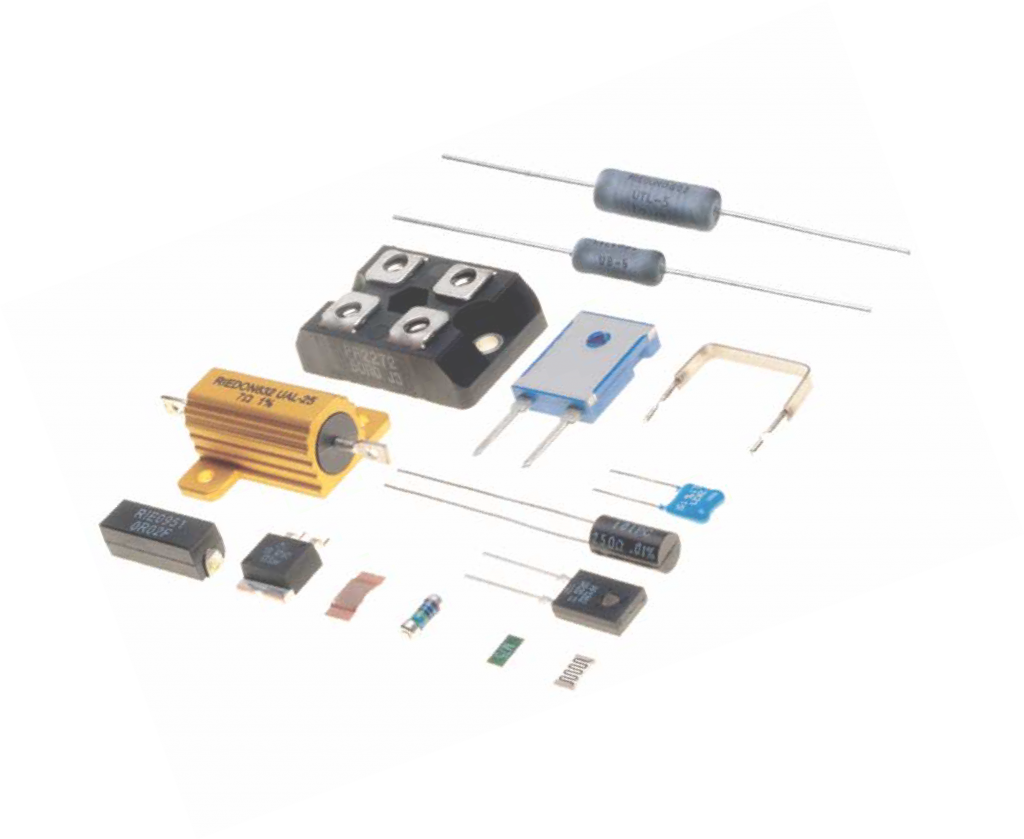 Figure 1. Easy customization is one of the major advantages of wirewound resistor technology, as shown in these examples from Riedon.

Like every component, the fabrication technology used in resistor manufacture has changed over time and resistive films, for example, have made a significant contribution in allowing the cost-effective mass production of devices that are increasingly miniaturized.

Yet the traditional wirewound resistor, despite a substantial decline in the number of manufacturers of this component in recent decades, remains the best solution for many specialized applications.

One reason for the survival of wirewound resistors is that all of the alternative fabrication techniques have drawbacks. For example, the use of conductive inks to produce carbon film or thick film resistors can produce very low-cost components but the resulting devices have limited pulse handling, no better than 0.1% initial tolerance, and poor long-term stability, typically 500 to 1000ppm/year. The temperature coefficient of resistance (TCR) of carbon and thick film resistors is high, around 50 to 100ppm/°C.

Moreover, relatively high current noise of -18 dB to -10dB is typical, where:

Carbon composition resistors, made by binding conductive carbon powder and an insulating material (usually ceramic) in a resin are some of the earliest resistor types. The proportions of carbon and insulating material determine the desired resistance value. It’s difficult to achieve accurate values so ±5% is often the best initial tolerance available and they exhibit poor temperature stability with a TCR of some 1000ppm/°C. These resistors also have high current noise (-12dB to +6dB ) and suffer from poor stability over time.

Metal film types perform better. They deliver improved tolerance (as good as 0.01%), TCR of 10 to 200ppm/°C and stability of 200 to 600ppm/yr. However, these figures still cannot match those of wirewound alternatives, and their pulse handling capability is significantly lower.

As a result of the limitations of other technologies, wirewound components continue to be used in many applications. They can handle high-level pulses and transients, can dissipate substantial amounts of power (some are rated at up to 2.5kW), and they can be made with great precision – some have initial tolerances down to 0.005%. Just as importantly, they are stable (15 to 50ppm/yr), maintaining their precision over time because they are made with stable materials. Wirewound resistors are also among the lowest current noise resistors available at -38dB.

Figure 2. The fundamental construction of a wirewound resistor has changed little over time.

The basic structure of a power wirewound resistor has remained unchanged for many years. As the name suggests, a resistance wire is wound around a central core or former, usually made of ceramic. Metal end- caps are pressed onto the core, and the resistance wire welded to them.

Finally, the assembly is encapsulated to protect it from moisture and physical damage. Wirewound construction also produces devices that are easy to customize, so engineers have the freedom to specify exactly what they need, even if the final quantities required are in the hundreds, rather than tens of thousands. And although familiar, the technology has not stood still. For instance, advances in materials science allow the construction of devices with tightly controlled response across a range of temperatures, with TCR as low as 1ppm/°C.

advantages. When a high precision resistor is required, for example, a longer resistance wire can be used, allowing the value to be trimmed to great accuracy by removing a few centimeters (or even millimeters) of wire.

The choice of material is also the major factor influencing the temperature characteristic of the resistor. For example, low-TCR “RO-800” alloy is formulated to have a TCR of 5 to 10ppm/°C. For comparison, pure nickel has a TCR of 6700ppm/°C, and copper a TCR of 3900ppm/°C. The material choice, therefore, allows the manufacturer to tailor the resistor to desired characteristics. In general, low TCR is desirable.

However, in some situations, such as temperature sensing and compensation applications, the opposite may be true, since the specific purpose of these components is to respond to changes in temperature.

Wirewound components are sometimes chosen for their ability to continue operating in extreme temperatures. Devices such as Riedon’s UT series of axial resistors, for example, operate from -55°C to 275°C, and continue to function at even higher

temperatures with de-rating. These capabilities make the technology well-suited for use in the aerospace industry, and in high temperature applications such as fire suppression.

Power handling and energy dissipation characteristics are similarly linked to the physical construction of the device. As a general rule, a resistor with a larger mass can safely absorb and dissipate more instantaneous power and more energy overall, and this is another strength of wirewound technology. 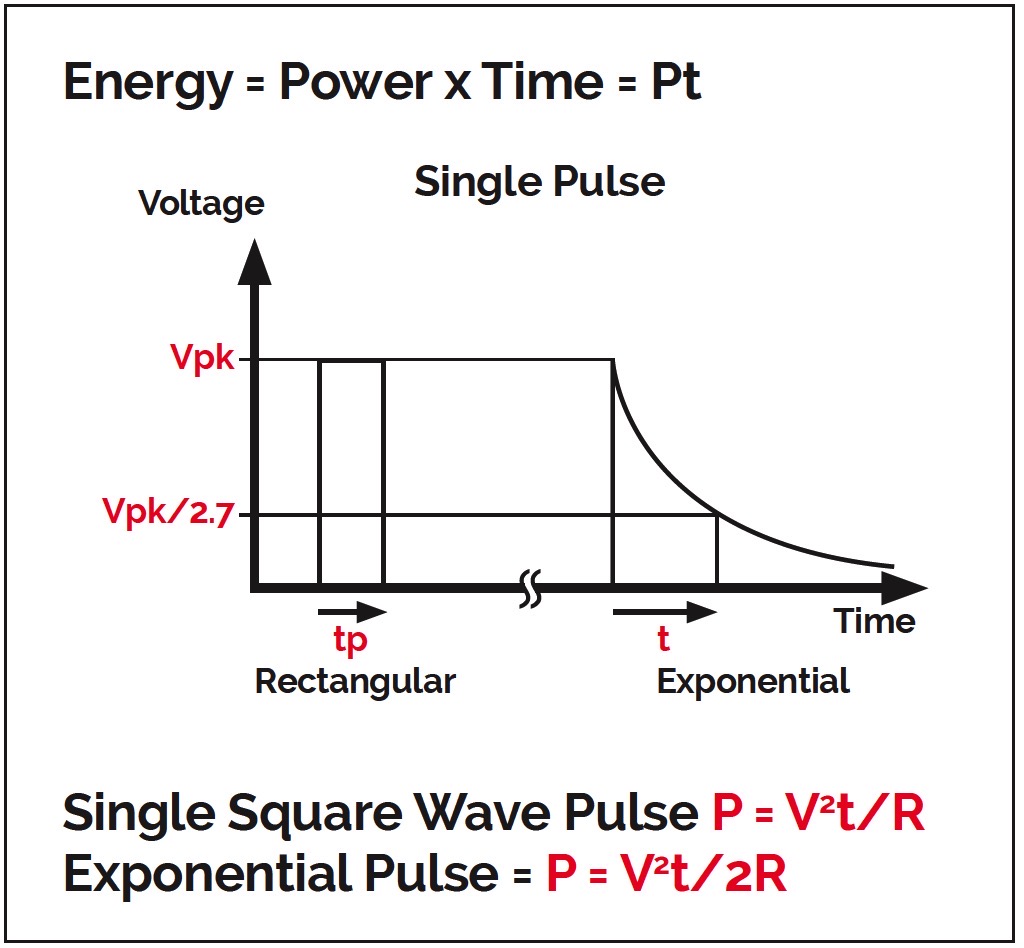 Figure 3. Pulse shape, repetition rate and duration all need to be understood in order to calculate the required energy handling capabilities.

One common use for wirewound resistors is in pulse handling applications. A device such as a medical defibrillator needs to dissipate a large amount of energy in a very short time, putting its electrical components under a high degree of stress. To protect these components from failure, engineers typically design-in a resistor that can absorb the energy of a significant current surge of very short duration (milliseconds). In another application, wirewound resistors are used to protect a metering module installed in a solid-state electricity meter. Here, the resistor absorbs the high current generated when a metal oxide varistor (MOV) clamps in response to a voltage surge on the grid. Surges can have manyncauses, including lightning, inductive loads (motors), capacitor banks, switchgear, or even switching heating and ventilation systems in and out of circuit. For these types of application, resistors in the UT series mentioned above are often prefered.

Determining the right pulse handling capabilities for a particular application is not always an easy task. Dealing with inrush current implies different requirements than transient suppression. 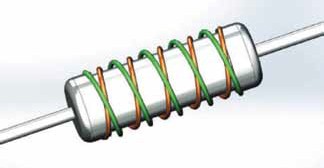 It is not easy to capture within a datasheet all of the information required to make such a choice. For pulses of up to five seconds, the industry standard specification is a withstand of five-times rated power for five seconds, so a 5W resistor must be able to handle 25W for 5 seconds (125 Joules), regardless of package size or resistance value.

For shorter pulses, the mass of the resistance wire determines the Joule rating, which is then dependent upon resistor value and package type, including its size and whether it’s an axial or surface mount component. Repetition rate and pulse shape – square, triangular or irregular – also have to be taken into account.

Wirewound devices excel where accuracy is important. For instance, four-terminal components are available in values from 0.01Ω to 1kΩ with tolerances down to 0.005% and current handling capability of up to 25A.

The most commonly cited disadvantage of wire wound resistors, particularly with respect to high-frequency applications, is their self-inductance. However, this can overcome with a bifilar or Aryton- Perry winding technique, shown in Figure 4, in which the turns are arranged so that two opposing magnetic fields are created (one clockwise and the other counterclockwise), canceling out the inductance, except the residual amount accounted for by terminations and connecting leads. Inductance is typically reduced by 90% or more compared to a standard part.

From Joule-rated devices for energy absorption to miniaturized components for current temperature sensing, wirewound resistors continue to offer significant advantages over alternatives in many applications, as shown in Table 1.

Although metal foil technology is a close second to wirewounds, other technologies are generally unable to measure up in power rating, tolerance and TCR. Surge current capability and stability are other important specifications often not found in data sheets. Wirewounds have 2 to 5 times the surge current capability of film products. Stability is hard to define, but wirewounds may be from 10 to 100 times more stable.

Many of Riedon’s Wirewound products are available in special high Temperature Coefficients of Resistance (TCR), ideal for use in temperature sensing applications. Wirewound sensors provide the most accurate temperature measurements over a wide range of temperatures and with the most flexibility in the selection of TCR. Riedon high temperature elements feature all-welded construction for use in high stress and vibration applications.

Special TCRs are most commonly used with precision wirewound resistor series (such as Riedon 100, SM and PC series) but may also be used with power series (UT, UB series) and Riedon’s surface mount series (S series). Custom packages can also be designed to meet particular specifications. 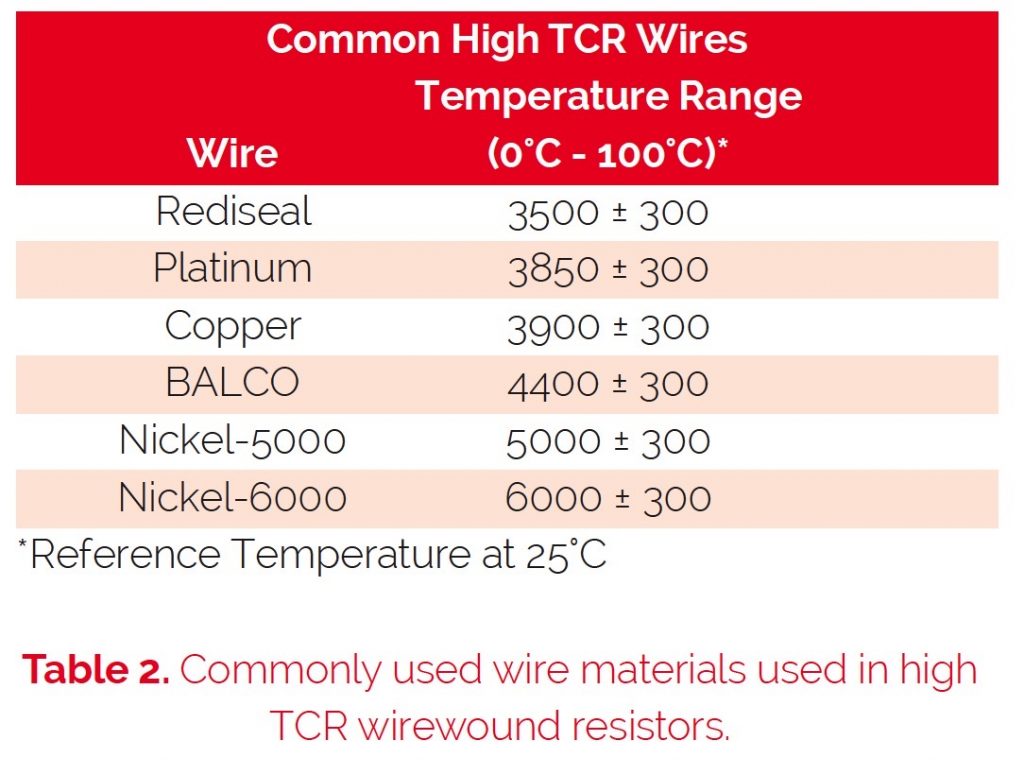