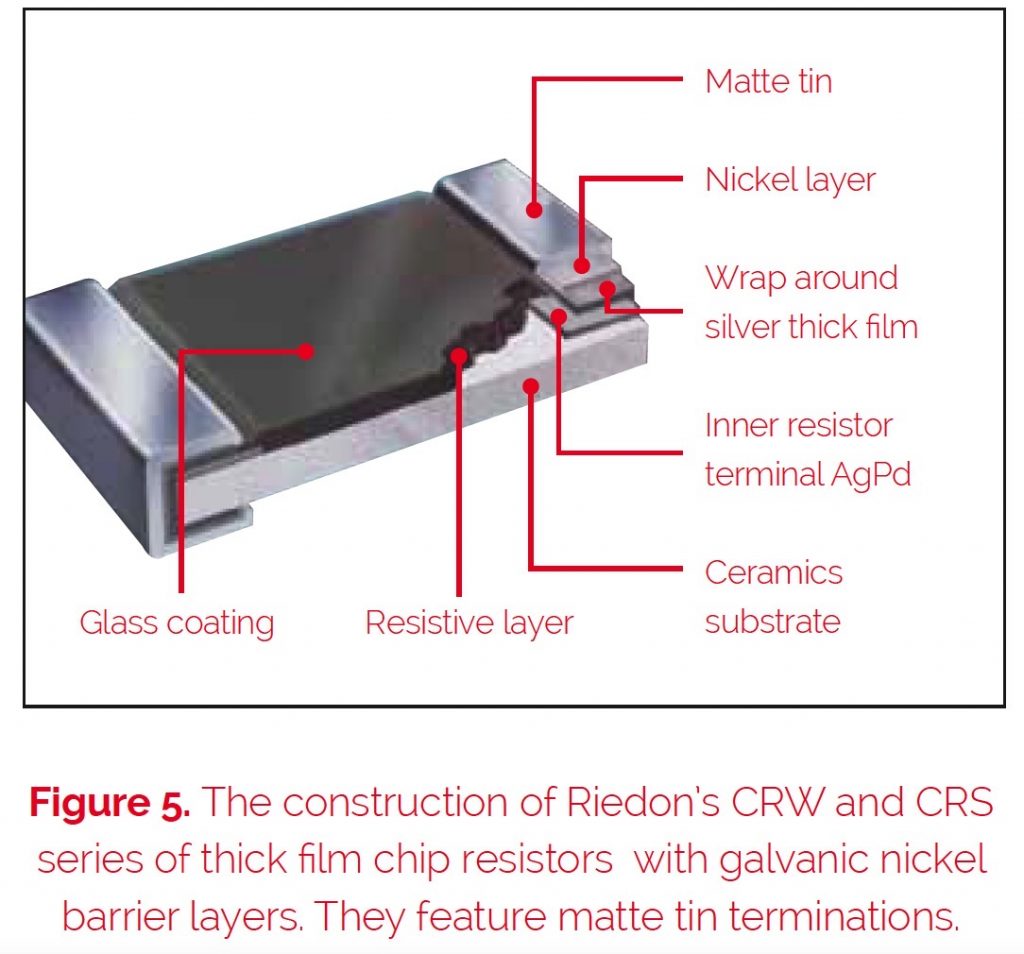 Film technology products have developed sufficiently to replacing older carbon resistors. There are two common film types, thick film and metal or thin film, with thick film being the most prolific type of resistor used in electronic devices. These devices may look similar, but they are constructed differently and have different properties.

Thick film resistors have many carbon resistor characteristics; they can be made small and are very low cost in high quantities. Their resistance tolerance, TCR, and stability over time is not as favorable as wirewound or foil types, but they have other benefits. Thick film resistors offer high resistance values, up to 10TW (tera-ohm), very high-temperature performance and high voltage capability and are inherently non-inductive. They are suitable for the demanding requirements of medical, aerospace and downhole (oil and gas) applications. Riedon’s range includes precision high-value chip resistors, power chip resistors and trimmable chip resistors alongside standard models.

Thick film resistors are made by silk-screening conductive paste onto an insulating substrate (see figure 5). The paste is fired to make the assembly permanent. These resistors can be made small and are low cost in high quantities, and are especially important in hybrid and integrated circuits because resistors can be printed onto the substrate, eliminating board loading and soldering steps.

Standard components use nickel/tin terminations (see figure 5). With a continuous working temperature of 155°C; nickel limits the working temperature. Tin can also only be used up to 230°C. Some nickel/tin-free devices are now available from Riedon (see figure 6) which use a special termination technology. These resistors can be used up to 300°C, with the limiting factors being the interconnection technology and the substrate material for the unit. They are also absolutely non-magnetic, making them suitable for applications where strong magnetic fields are present, such as CT and MRI scanners. 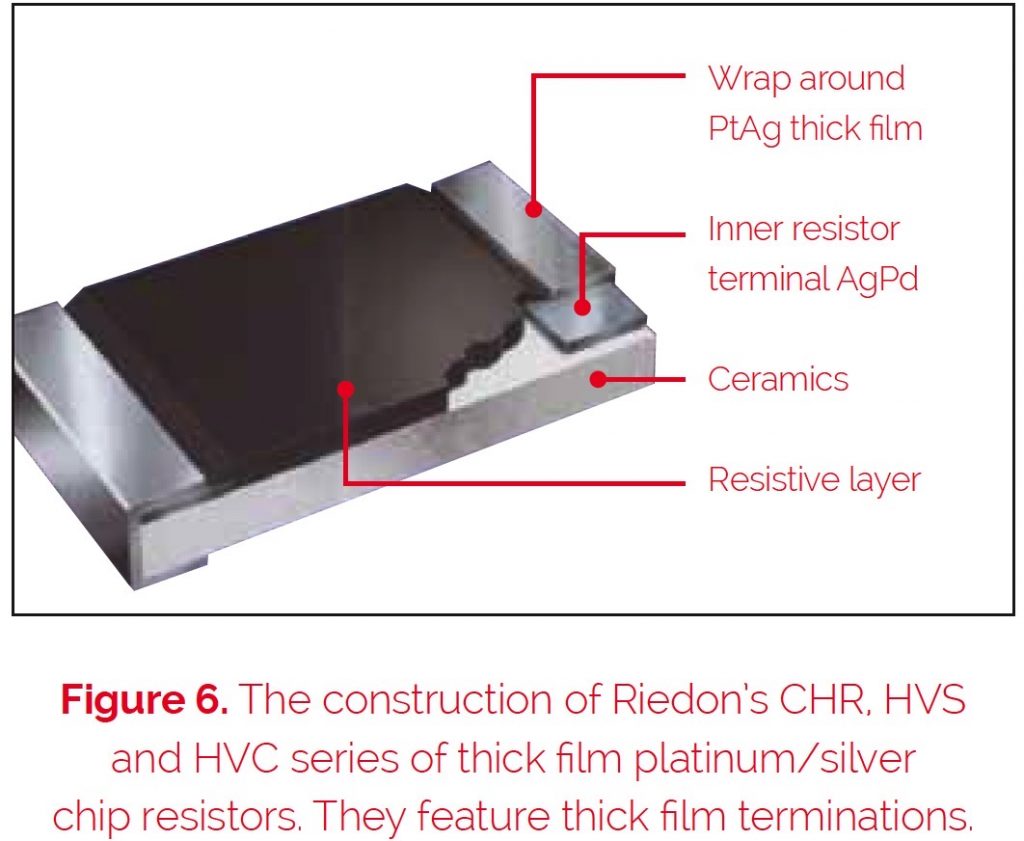 Nickel/tin-free models of thick film resistor are suitable for lead-free soldering or silver epoxy attachment (silver epoxy is highly reliable at high temperatures). They don’t suffer outgassing under the vacuum conditions used with conductive epoxies; standard components are coated with a polymeric material that can out gas. Another benefit is that the absence of tin means they cannot generate tin whiskers, a feature required by many aerospace applications.

All thick film resistors display low voltage coefficient of resistance (VCR), a property of the device defined as the change in resistance with respect to the voltage applied over a specific voltage range. Layout, size, termination material and trimming geometry all affect the VCR of a given device.

Thin film resistors are built on a ceramic base, with the resistive layer sputtered on top using vacuum deposition to create a chip resistor. The material used is commonly an alloy of nickel and chrome called Nichrome. The thickness of the film, which at around 50 to 250 angstroms is thousands of times thinner than thick film devices, determines the resistance, but this can be calibrated by laser trimming if required. Alternatively, the film can be sputtered onto a cylindrical surface with axial leads; the resulting devices are typically called metal film resistors rather than thin film, but the concept is the same, albeit at the expense of parasitic inductance. 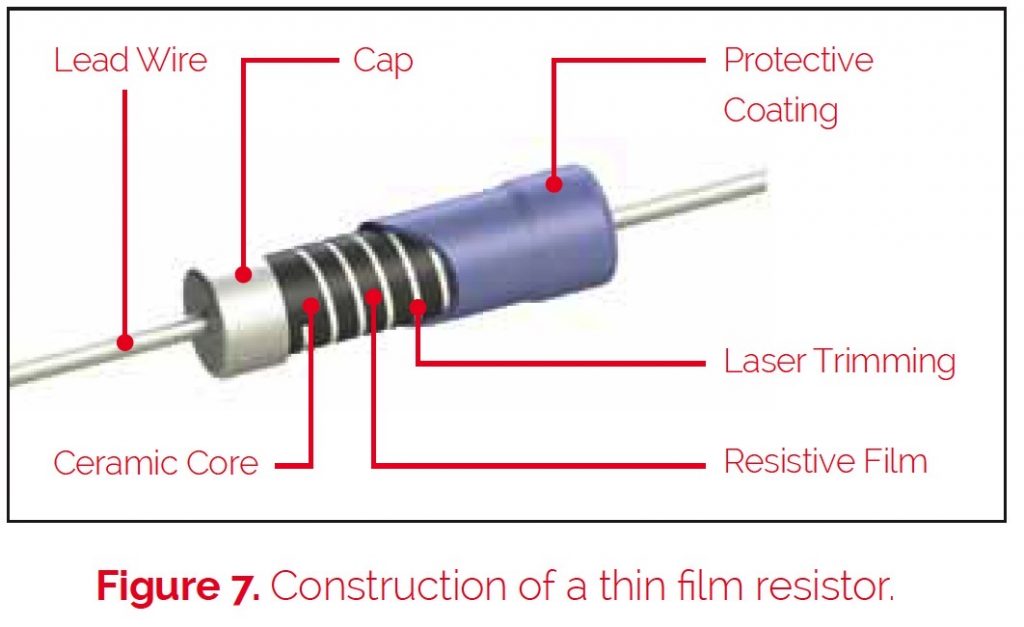 Thin film resistors are able to achieve much lower tolerances and resistor temperature coefficients, have lower noise, lower parasitic inductance, and lower capacitance compared to thick film devices. With these better qualities, thin film resistors have generally been much more expensive to produce than their thick film resistor cousins, however, improvements to mass production techniques and operation conditions have greatly reduced the cost to manufacture high-quality, precision thin film chip resistors. Riedon’s CAR series resistors are available with tolerances to ±0.01% and temperature coefficient ratings to ±25 ppm/°C. 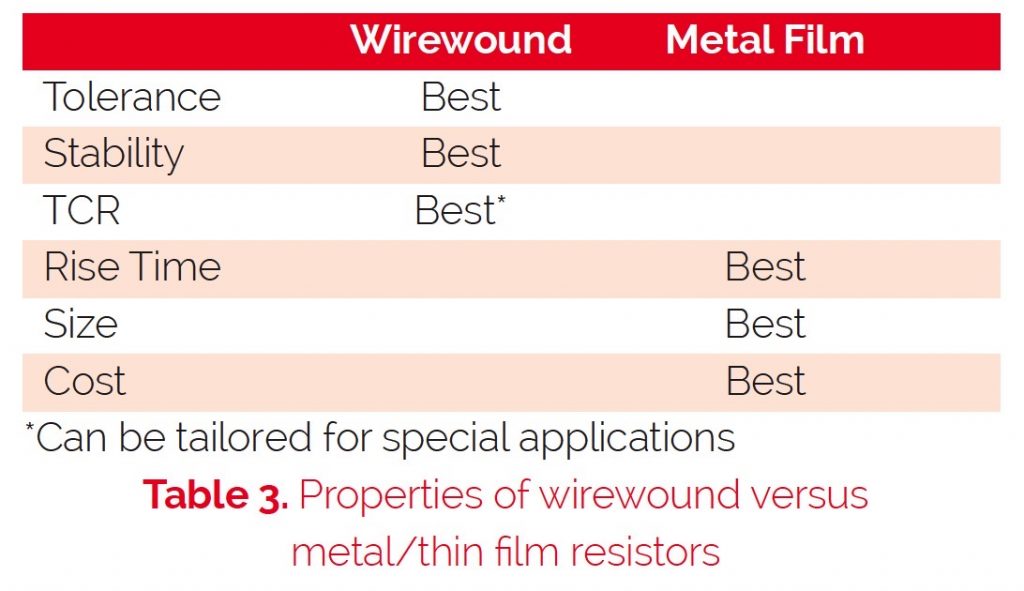 Compared to wirewound precision resistors, thin film devices are not as accurate (>0.01%), have higher TCR (20-200ppm/°C), and are not as stable (200-600ppm/ yr.) However, they come in small packages, are low cost in high quantities, and are excellent in high frequency and fast rise time applications. The key to selecting a precision resistor technology is therefore in the application, as summarized in table 3. If the application involves fast rise times (microseconds) or high frequencies (megahertz), thin film products are best. When cost is the only consideration, use thin films. Incidentally, on a board full of typical components, the higher cost of a few precision resistors will have a small total cost impact. If size is critical, as in hybrid circuits and chip applications, thin films have the advantage.